The Loy Krathong festival is held on the evening of the full moon of the 12th lunar month in the Thai calendar, which generally falls in late-November.  There seem to be many different interpretations of the history and meaning of the festival, but most people consider it a thank-you to the water goddess for the end of the rainy season and a successful rice harvest.

The word “loy” means float, and “krathong” means crown.  As part of the festival, thousands of vendors set up little tables along the street where they’re making and selling these “floating crowns”.  They’re typically made from a base of a slice of banana plant that floats, and are decorated with ornate folded banana leaves and fresh flowers.  They also have one or more candles and a few sticks of incense on them. 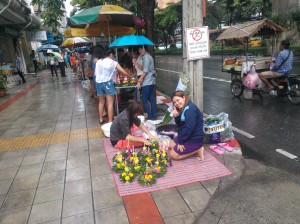 The Thai people take the loy krathongs to nearby rivers and lakes, light the candles and incense, say prayers with them, and put them in the water to float away.  By late-evening, the lakes and rivers are a sea of the floating krathongs, with candles lit and incense burning.

Loy Krathongs being set afloat on the lake

I bought a krathong from a very nice vendor lady on the sidewalk (I paid about $1.50 for it, including tip) and went to a park in the city that has a small lake.  There were thousands of people crammed around the edges of the lake, lighting their krathongs and sending them afloat on the lake.  The smell of incense was everywhere.  It was a very beautiful experience, with the lake lit up by the thousands of burning krathongs, as well as the full moon above the city. 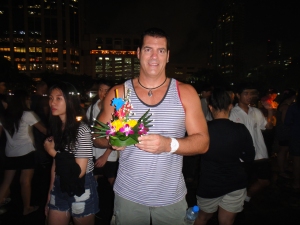 Me getting ready to set my Loy Krathong afloat

Candles on the Loy Krathongs lighting up the lake

Loy Krathongs lit with candles floating on the lake

In northern Thailand, they celebrate a similar festival during the same time, although in addition to the floating loy krathongs, they also light Chinese lanterns and send them up into the sky by the tens of thousands.  And unlike the 1-day festival in the rest of the country, the festival up north goes on for 3 days.  There are so many lanterns being sent up in the sky every night that the airlines have to cancel all flights in and out of Chiang Mai after 6pm for those three nights to avoid the lanterns getting sucked into the plane engines!

December 5 marked the King’s 85th birthday.  As I noted in a previous blog post, the Thai people have an enormous amount of respect and adoration for the King and Royal Family.  Each year, they have a huge celebration in observance of his birthday, and this year was no exception.

In Thai culture, each day of the week has a different color associated with it (Sunday is red, Monday is yellow, Tuesday is pink, etc.).  The day you are born on is your “color”.  The King was born on a Monday, so his color is yellow.

Leading up to his birthday, there were large posters/paintings/murals of him in front of nearly every mall, office building, road intersection, etc., with yellow banners and ribbons, and often surrounded by dozens of yellow marigold flowers.  In front of many of the malls, they also had a table and chairs set up with guest books sitting there for people to write birthday wishes to the King. 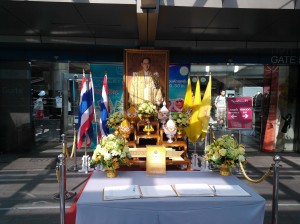 Shrine to the King, along with guest books to sign, at a local mall

On his birthday, alcohol is prohibited from being sold or consumed, so most of the bars/restaurants are closed, as well as many of the smaller, local shops and businesses.  Hundreds of thousands of people, all wearing yellow shirts and waving yellow flags, lined the streets and the areas in front of the Royal Plaza where he gave a rare public speech.  I watched part of it on TV, and it was actually pretty interesting to see all the pomp and pageantry from the military and royal guards leading up to his speech.  Throughout the city, nearly every Thai person I saw that day was wearing a yellow shirt in honor of the King’s birthday.