On one of my first trips to Thailand back in 2000 or so, I took a Thai cooking class one day. It was a great experience, and I’ve always thought about taking another class or two. The opportunity came up in January when a friend wanted to take a class and asked if I wanted to do it, so I jumped at the chance.

There are many places in Bangkok that offer Thai cooking classes for locals and tourists. But the one we went to is called “Cooking with Poo”. No, I’m not kidding, that’s really the name of it. “Poo”, as it turns out, is the name of the woman that runs the cooking school. She’s actually fairly well known, and has been featured on quite a few European and American TV cooking shows.

Before doing the cooking class, they took us to the Klong Toey wet market. I’ve known about this market and driven by it many times over the years, but have never been in it. For those that don’t know, a “wet market” is typically an outdoor market with fresh fruits and vegetables straight from the farmers, as well as live (and prepared) poultry, fish, seafood, reptiles, etc. If you’re at all squeamish about where your food comes from, this is probably not the place for you. 🙂 The Klong Toey market isn’t really a tourist destination; it very much is a working market for the local people. Many large and small restaurants and street food vendors come to this market every day to get their food to prepare and sell.

There were two areas that stood out for me in the market. In one area was a bunch of chickens and ducks in wicker cages. Nearby, some women were butchering, boiling, and de-feathering them right there. The other area that caught my attention was several stalls selling frogs. They typically had fishnet bags full of live frogs, then another metal tray with lines of dead, skinned frogs; and above that a line of frogs that each still had the skin on but had a small incision in its chest and the heart pulled out laying on its chest, still beating; and then another line of more butchered and/or ground up frog meat. That was one area in particular where, although it was fascinating to see, I was happy that I am a vegetarian!

After an amazing tour of the market, we made our way to the cooking school, which is in one of the slum areas of Bangkok. That alone was fascinating just walking through the rows of shanty homes to get to the little shophouse where the cooking school is. It’s thousands of tiny homes stacked on top of each other, with very narrow walkways between them. Although the people here obviously have very little money, the neighborhood is clean, people are smiling and friendly, and I felt very safe and welcomed there.

In the cooking class, Poo talked about each of the dishes that we were preparing, giving us a lot of information about where it originated, different ways of preparing it, why certain ingredients are used, etc. Then we took turns cooking our dishes. We made 3 dishes each: Lemongrass salad, Phad Thai, and Masaman Curry. All of them were incredibly delicious. Then we finished it with a variety of Thai fruits and dishes of mango and sticky rice (a favorite Thai dessert). We left the school feeling very, very full! 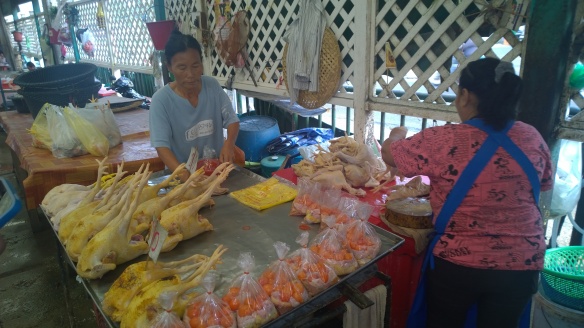 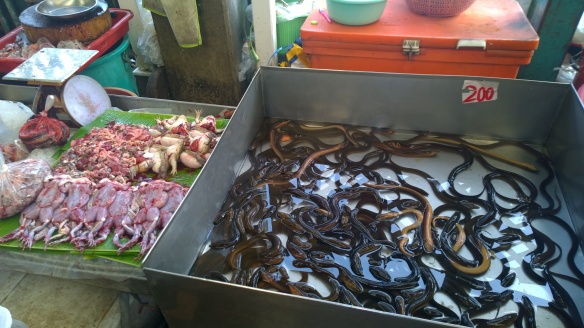 Eels on the right, frogs on the left. 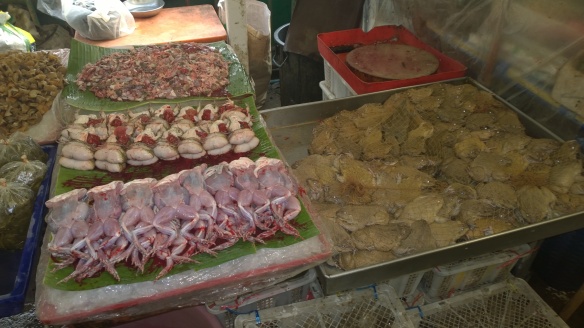 Live frogs on the right, less live on the left. The middle row of frogs are alive, but have their hearts pulled out of their chests. 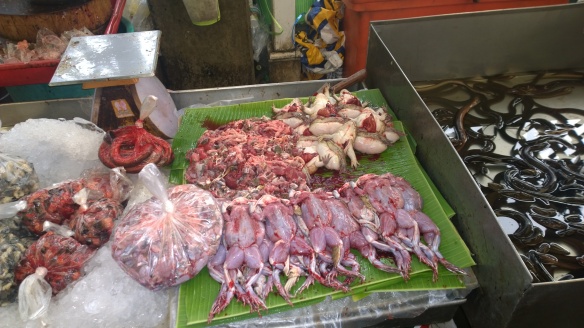 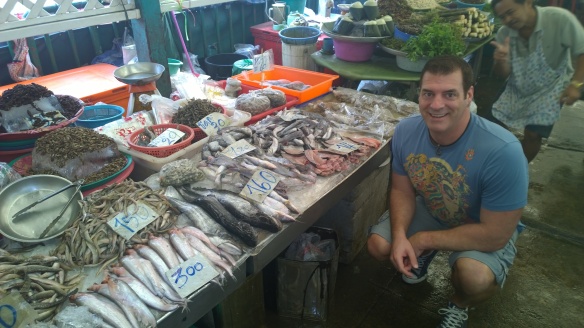 Me with all that fishy goodness… 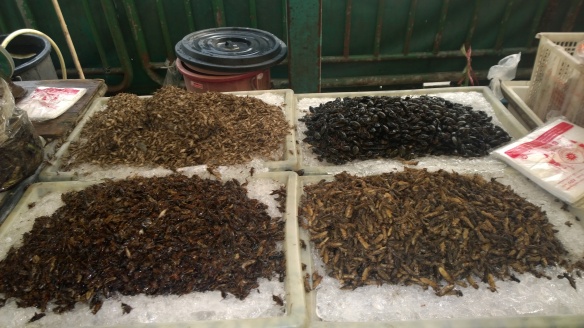 Cockroaches, crickets, meal worms and some other kind of water bug. On ice, to keep them fresh. Yes, they really do eat them. 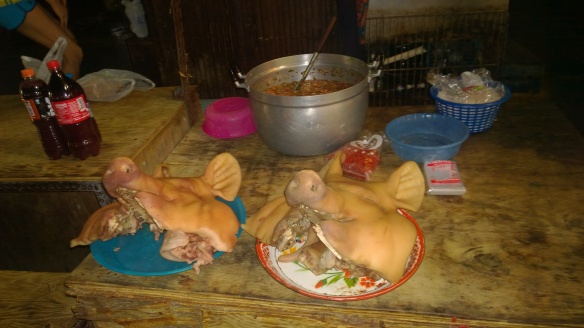 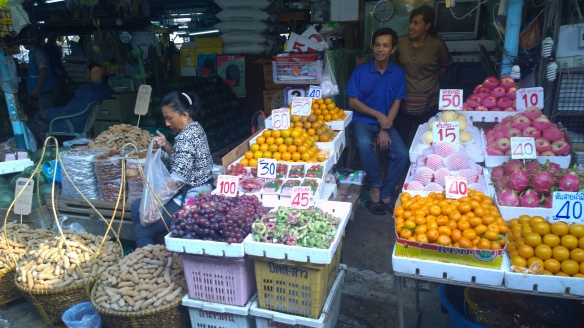 Finally an area of the market that caters to us vegetarians! 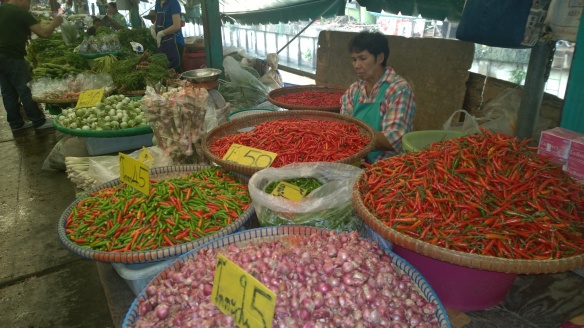 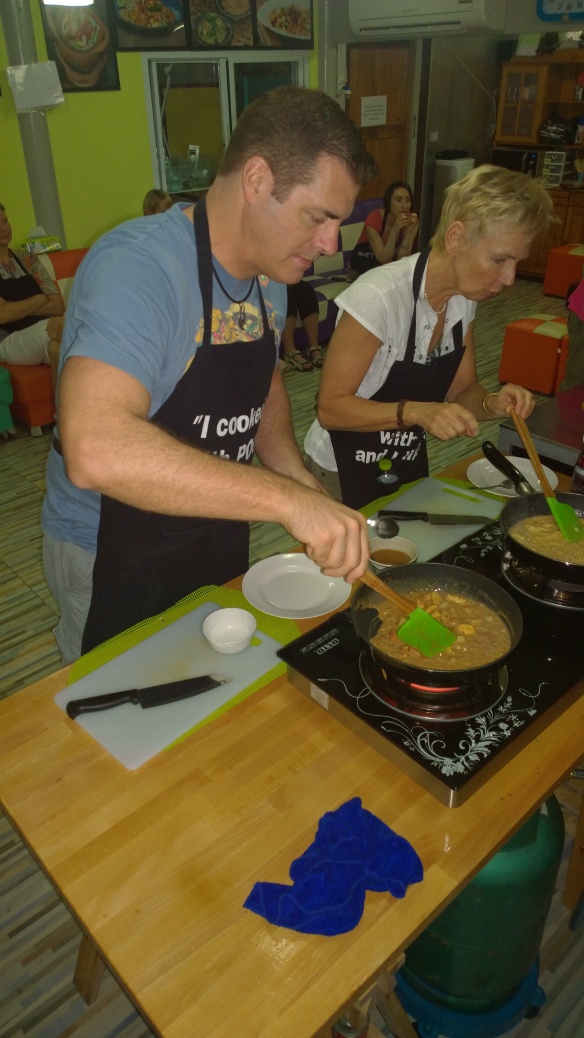 Me cooking up a tasty Massaman curry. 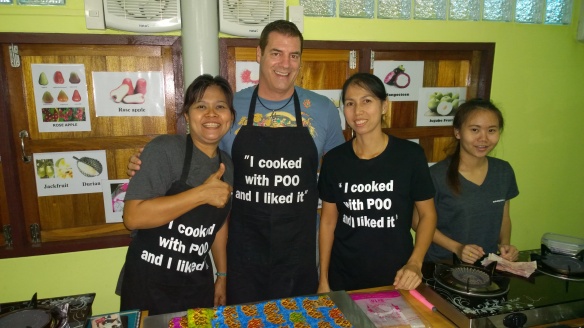 Me with teacher Poo on the left and her assistants on the right.