Skip to primary content
It’s been a fairly quiet week this week. Several people have , err, asked that I post more pictures. I’m posting a few more here, but let me just explain that this is my 15th or so trip to Thailand, so many of the things I see here I’ve already seen so it doesn’t occur to me to take pictures of them. I tried to do a little of that this week so you can see a more of the daily life here (click on any of them to see larger pics). I’ll take/post more over the next month while I’m in Bali and Myanmar, since I haven’t been to those places before.
Flood Prep
All week, I’ve seen a lot of dump trucks driving around full of sandbags. Many of the buildings have sandbags either lined up around them, or piled up ready to be used if necessary. While the government thinks that the central Bangkok area won’t be flooded, no one is entirely sure. The floodwaters from northern/central Thailand began reaching Bangkok last night, and the seasonal high tide began this morning, which backs up the rivers. It’s a little bit surreal seeing the devastation that the flooding has done upcountry and not knowing for sure if we’re next to get it. Meanwhile, the daily torrential rains have continued all week. It’s not raining constantly, but it comes and goes with little warning. And this isn’t any mamby pamby drizzly rain like Seattle has… this is full-on, hardcore rain! The rain droplets are literally the size of marbles, and when it comes down, you can barely see 10 feet in front of you. It’s also accompanied by crazy thunder and lightning, which is kind of cool – reminds me of the big summer thunderstorms in Montana.

Sandbags around a building in prep for floods

Much of this week was spent trying to get my visa for my trip to Myanmar. I had read up on everything I needed to do to get the visa before I came over here, so I foolishly thought it would be a simple process. I just needed to go to the Myanmar embassy, fill out an application, and get a visa. That’s basically what happened, just on a somewhat extended timescale. It takes about an hour to get to the embassy, as I have to walk to the nearest Skytrain station (Skytrain is the elevated light rail mass transit system), take that part way, switch to another train, then get off and then take a taxi the rest of the way to the embassy. It went a little something like this:

1. Tuesday. Go to embassy around 1pm, and it’s closed. Sign on the door says visa applications are accepted 9am-noon on weekdays. Ok, no big deal, but geez it would be helpful if the embassy website might include this pertinent piece of information.

2. Wednesday. Go back to embassy. Taxi driver drops me off in front, I go around the corner to the visa door and it’s closed. No sign indicating why. I found a security guard who was super helpful in telling me that the embassy was closed and I needed to come back the next day. By this time the taxi had left, so I ended up walking in the rain back to the Skytrain station. On the positive side, though, I found the Robot Building (more on that below).

3. Thursday. Go back to embassy. On the way, the taxi driver takes a wrong turn and we’re stuck in morning Bangkok traffic for the next 45 minutes. Finally get to the embassy and it’s open – hooray! Fill out my form, stand in line for an hour and a half, and find out that I don’t get the visa right away. I have to leave my passport there and come back in 2 days (or 1 day if I pay a little extra) to pick it up with the visa. Yikes. Ok, so I pay the extra money to get the 1 day service. Oh, and I found out that the embassy was closed the previous day because it was a national holiday in Myanmar. That’s understandable, but again that would be a helpful piece of information to put on the website and/or notice on the door the day prior to that.

4. Friday. Go back to the embassy and get my passport, with a nice little visa sticker in there for Myanmar. Success never felt so good!

Wednesday when I was walking back to the Skytrain station in the rain, I noticed the “Robot Building” across the street. I had read about it in some guidebook a while back but had never seen it in person. It was kind of awesome. Here are a couple pics I took of it from street level, and also a pic I found on the net that shows it from a better angle. Kind of cheesey, but cool!

Can't have a robot without nuts and bolts!

While in line to pick up my passport/visa, there were a couple guys ahead of me talking. From their “lack of accent”, I figured they were American and asked where they were from. One was from Seattle, the other from the Bay area. The father of the guy from Seattle used to work at Microsoft, but he left a couple years ago to start an Internet marketing business based in Bangkok. Both of the guys worked at his company, so I had a good conversation with them about living/working in Bangkok (suffice it to say, they love it and didn’t seem to have any desire to go back to America). Interesting.

I was walking around the other day, just exploring some areas of the city I hadn’t been to before, when I turned down a street and immediately felt like I had just gone into a different country. It was a muslim/Arabic neighborhood. The buildings all looked the same as anywhere else in the city, but the signs were all in Arabic, many of the men were wearing the white robes and head scarf things, and some of the women were in all black robes and burkhas. It was really interesting to see. One of the open-air restaurants was hard to miss: it was entirely made out of chrome. The tables, chairs, walls, ceiling, signs, salt & pepper shakers…everything! Since I’ve never been to the middle east, I don’t know if that’s typical or not, but it was a shock. Then, of course, I started laughing because I thought that the guy that owns the place probably has the most pimped-out, tricked-out car with chrome rims, chrome door handles, chrome doors, chrome everything… LOL! Ok, I crack myself up sometimes. 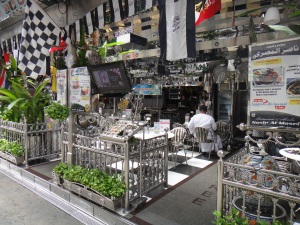 There’s a mall here that I like to go to occasionally (Siam Paragon). It’s mostly high-end stores that I have no desire to shop at, but it has a great food court and great people-watching. Since the last time I was here, they opened a Krispy Kreme donut place in the food court. Now normally that wouldn’t be anything special to blog about. Except for the fact that that place does an *insane* amount of business! There is constantly a line of people there, and they’re not buying individual donuts – they’re buying boxes and boxes of dozens of donuts! I’ve never seen so many people carrying around big plastic bags with boxes of donuts. I would love to see the sales numbers from Krispy Kreme headquarters – that store has got to be one of their top money makers. I’ve never seen that kind of donut buying at any of the Seattle-area Krispy Kremes. I’m not sure why the Thais have such a love for those donuts (well, other than they’re little round cakes of sweet, dreamy yumminess made by frosting angels from heaven…).

Traffic is almost always at a standstill here.

When traffic is bad, motorcyclists just ride down the sidewalks. 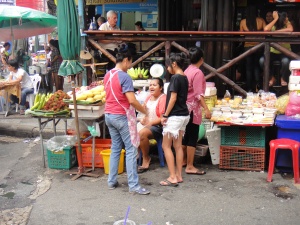 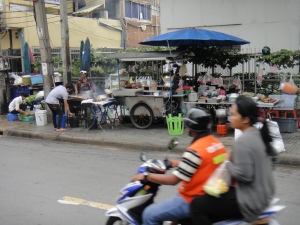 Amazing how much food a single cart can cook up

I think I found the source of Bird Flu (note the pigeon in the food basket next to the orange cone...)