If this blog post looks upside down to you, I apologize – it’s because I’m south of the equator right now. Hahaha. After 12 days of torrential rains in Bangkok, I made my way this week down to Bali, Indonesia. The weather here is absolutely perfect: 85 degrees and sunny every day (and there are wild unicorns, and leprechauns… it really is a magical place!). Most of the pics are just beach stuff since that’s most of what I’ve done.  In the next day or so I plan to hire a driver to take me around to a bunch of different sights around the island and will post more interesting pics.

My first few days were in Kuta. Kuta is kind of the main surfing town in southern Bali. The number of surf shops is mind-boggling: Billabong, Hurley, Volcom, Ripcurl, Element, Etnies, Quicksilver, Oakley… all of them have huge, multi-floored stores here, and everything about the vibe here just screams beach and surfing. The beach goes on in either direction as far as you can see, and it’s not at all crowded. You only need to walk a little ways to find a whole section of beach to yourself if that’s what you want. It’s nice being at a beach where big waves are crashing in – Thailand beaches don’t really have big waves. I’ve never surfed before, but I think I could do it now after spending a lot of time watching the surfers out on the waves. The ones that aren’t very good all seem to make the same mistake: they fall off their surfboard. I think I’ll go give them some of my valuable advice… 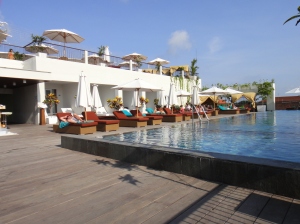 Rooftop pool at the place I stayed in Kuta Beach

The vast majority of the tourist population is Australian. In fact, other than a couple of people from New Zealand, every single tourist I’ve met has been from Australia. And this is supposedly the “slow season” – I couldn’t imagine what this place would be like in July/August/September which is the peak season.

Let’s see… so we have a surfing beach town and we have Australians. Put those two together, and you can well imagine that Kuta is also a bit of a party town! A surprising number of bars and restaurants are open 24 hours a day…yikes. And those Aussies certainly know how to drink like rockstars, and in general are very fun (and funny!) people to be around. But as the night wears on, they also seem to know how to puke like rockstars as well…and then suddenly they’re not so fun to be around.

The local beer here is called Bintang, and it’s surprisingly good (perhaps, a little too good). Every single shop along the streets sells Bintang shirts and tank tops, in every color of the rainbow. The funny thing was that literally within an hour of checking into my hotel, I was walking down the street and bought one at the first shop I went into, thinking it was kind of cool looking. Then as I continued to walk to the beach, I realized that *everyone* is wearing Bintang tank tops. It’s like it’s the official Kuta uniform or something.

Me and a couple of the crazy Australians

If you know me, you know that I hate karaoke. I mean hate it with a passion. I’ve never done it, have no desire to do it, and can’t stand listening to other people sing badly. However, I saw a twist on it at one of the clubs that was pretty cool. Instead of having the music on CDs, they had an actual live band that played your song and you were up on stage with them, and the band kind of did backing vocals if you didn’t know all the words or were singing badly. It actually was really fun to watch. Maybe it was the alcohol talking, but for a minute I even considered doing it, but then I figured the only song I wanted to sing they probably didn’t know (Vanilla Ice’s “Ice Ice Baby”).

A few blocks down the road from my hotel is the site of one of the nightclubs that was destroyed in a terrorist bombing in 2002. There’s a large stone memorial wall with the names of the more than 200 people who were killed. It was a very emotional thing to see. Even though I had no connection to anyone killed there, I still got very choked up looking at it. I also didn’t realize until I saw it that the anniversary of the bombings was just last week (October 12). Given the large number of Australians that were killed, it seems to be a somber stop for all of them whenever they come to Bali, where for at least a few minutes the surfing and partying take a back seat to a moment of respect and remembrance of their fellow “mates”.

For the past 8 months or so, I’ve been following several blogs and web sites by people who are doing internet entrepreneur things and “lifestyle design” stuff. I won’t explain all of it here, but much of it is based on Tim Ferris’ book, “The 4-Hour Work Week” and talks about how to be independent and work from a laptop anywhere in the world. One of the guys I’ve been following, Dan Andrews (TropicalMBA.com), is from San Diego but has been living in Bali for the past several years running some e-commerce and other sites. I met him for lunch today and had a great discussion about his experiences as an expat here, the larger expat community in Bali, the various internet businesses he’s involved in and others that his friends are doing. It was a fantastic meeting and he had some really great points about living abroad. He also had a great outlook on wealth versus happiness, and made some comparisons of his Bali lifestyle versus how much it’s worth to him in terms of material “things”. Some of his best quotes (roughly):

Some good and interesting things to ponder, which is exactly what I’m here to learn about. He has a villa in nearby Seminyak, which happens to be where I’m going to tomorrow for the next 4 days. He invited me over to check out his place, hang by the pool and meet the other guys he works with, so looking forward to that. 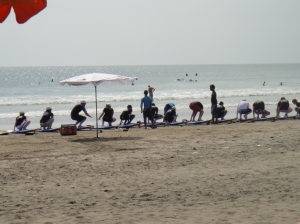 The Indonesian food here is somewhat similar to Thai food, in that it’s primarily rice, noodles and currries. But it’s got its own set of spices that makes it taste a bit different, and so far everything I’ve had has been amazingly delicious. Maybe it’s because it’s all loaded with salt (or more likely, MSG). The only downside is that it’s been a bit difficult to find vegetarian stuff. Thailand definitely has more broad vegetarian options. I can always have them keep the chicken/shrimp/beef/pork out of the dishes here, but surprisingly they don’t have much tofu here. So I’m struggling a bit to get my protein (if the Bintang beer had protein, I’d be all set!). Although tonight I managed to find a great vegetarian restaurant in Seminyak and had an awesome dinner! 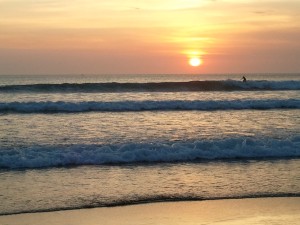 Surfer in the distance with amazing nightly sunset at Double Six Beach.

Sit on a beanbag on the beach, have a cocktail, and watch the sunset.

Balinese drummers on the beach.