In the 1990s, Thailand and other parts of Asia were in a boom period, where lots of investment and development was flowing into the countries. In Bangkok, the skyline was quickly growing higher and spreading out further as hundreds of new developments were being built. Then in 1997, the Asian Financial Crisis hit, and in a very short period of time, everything ground to a halt.

When I first started coming to Thailand in 2000, the Bangkok skyline was eerily dotted with partially-finished buildings all over the city. Tower cranes stood empty at the tops of buildings, with rebar sticking out of the concrete where you could see exactly where the pouring of new concrete stopped. Hundreds of buildings around the city were frozen in time in an unfinished state.

As the years went on and the economy recovered in the early 2000’s, investments and funding returned and most of the projects resumed work. The buildings that had been halted part way through construction were completed and the Bangkok skyline became that of fresh new skyscrapers, condos, hotels, and office buildings. That building boom continues today, as all around the city an unimaginable amount of new buildings – primarily condos and hotels – are pushing higher in the sky, and old rows of traditional Thai shophouses are being torn down to make way for new developments.

There are, however, some buildings that were halted during the late-1990’s that have never restarted construction. One such building that has always fascinated me is called the Sathorn Unique Building. It was intended to be a 50-story condo building with 600 high-end units, with stunning views of the Chao Phraya River and the rest of the city, topped with a gold dome at the very top of the building. When construction stopped in 1997, the overall building structure was complete and work had started on the lower floors with fitting out the condos with wood floors, plumbing, bathrooms, and painting the exterior of the building. In the 18 years since construction stopped, nothing has happened since, and the building has remained a very prominent standout in certain parts of the Bangkok skyline. 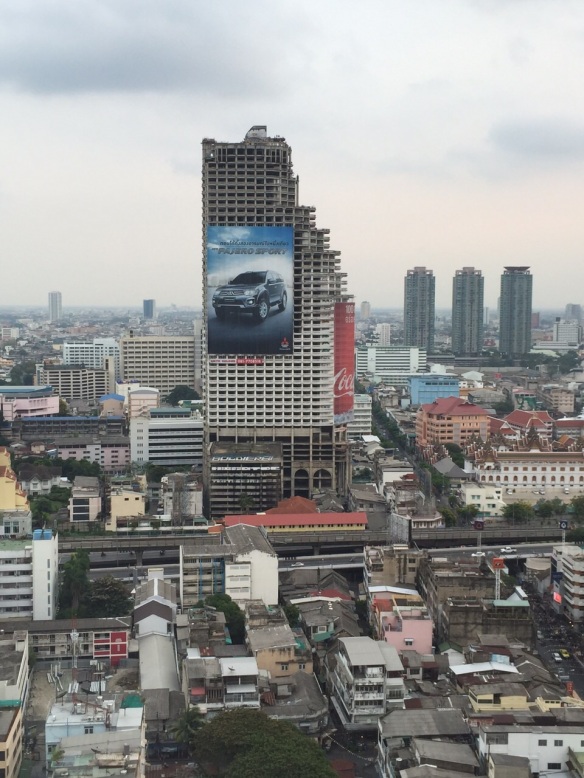 The Sathorn Unique building, aka the “Bangkok Ghost Tower”

The Sathorn Unique building is also called the “Bangkok Ghost Tower”. The Thai people tend to be fairly superstitious, and believe in various kinds of ghosts. The reasons I’ve hear that they believe it has ghosts is because it was built on a graveyard, and it casts a shadow on a Bhuddist temple very near the building. In December of 2014, a Swedish man hanged himself in the building, which has added more recent conjecture of the building being haunted.

About a year ago I read a story about some people who had sneaked into the building and climbed up to the roof. Since then I’d read or heard about a few other people that had gone there and said you could potentially pay a little money to a security guard at the site who would then “look the other way” to let you get through the fence into the building. It’s something I’ve wanted to do ever since hearing it was possible to get in there.

In April, a friend sent a message saying he was getting a group of people together to climb the building, so I jumped at the chance. We met near the building and walked over to the fence surrounding the site, and the fence/gate was already wide open. We walked up a small wooden set of stairs to get to the ground floor of the building, and inside were several people with their cars parked there, and men taking money from other people who wanted to climb the building. It turns out, at least the day we were there, it had become much more of an attraction than I had expected. We paid our money (200THB, about US$6.50) and made our way to the far end of the floor where the stairwell was.

The concrete stairs were narrow, with no hand railings and a lot of dirt and loose rocks on them, but otherwise easy to climb. Surprisingly, someone had run an electrical cord the entire length of the stairs, with small fluorescent lights on about every third floor so you had a bit of light to see better.

About every 10 floors, we would go out of the stairs on onto the floor, wandering through the condo units. It was one of the most fascinating things I’ve ever done. On the lowest floors, the units were fairly far along in construction. There are no windows or doors in any of the units, though, so nearly 2 decades of rain blowing in, dust, sun and heat had definitely done its fair share of damage to the materials.

On various floors we found stockpiles of construction materials. On one floor, there were several stacks of fiberglass bathtubs – at least 50 of them – still in their plastic shrinkwrap. On another floor, there were boxes and boxes full of 6-inch square ceramic floor tiles. Another floor had dozens of toilets waiting to be installed. 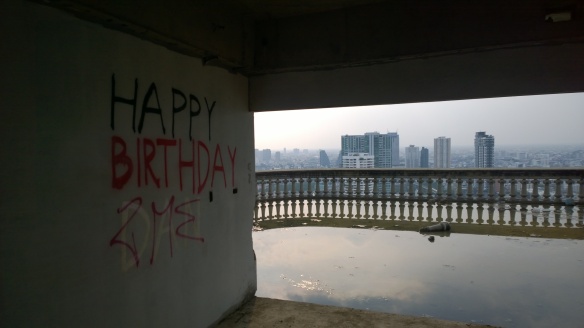 A little graffiti, a balcony filled with a rainwater pond, and beautiful view to the west.

The higher we got in the building, the less finished the units were. On the upper floors, the units were mostly just the concrete walls and floors, with no fixtures installed. And on the higher floors, particularly on the west-facing units, the balconies became larger with stunning views of the river below. Throughout various floors, people over the years had created some amazing graffiti murals on the walls.

Me on one of the balconies on the 37th floor

On the 37th floor, what would have been a stunning, large balcony looking over the Chao Phraya River. 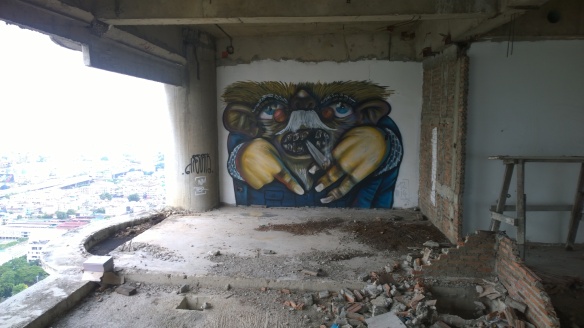 One of many murals/graffiti in the building

We finally made it to the roof, where there were already about 20 or 30 other people that had made the climb. If there would have been a prize for being the most sweaty, I think I would have easily won that. Climbing 50 stories is definitely a good cardio workout!

It was amazing to walk around and have a 360-degree view of the Bangkok skyline, the river below, and watching the beginning of the sunset. It was also interesting to look across and see the State Tower/Lebua Hotel building a few blocks away. The interesting point of that is that building is considered the “sister” building to the Sathorn Unique, in that they are very similar architectures, with the Lebua building being larger and taller (64 stories). The Lebua building also sat empty and partially finished until the early 2000’s, when construction resumed and they turned it into a mix of condos and hotel. On the roof of that building is an outdoor restaurant and bar, which several years ago became famous for scenes being filmed there for the “Hangover 2” movie. The times that I’ve been to the rooftop bar there, I’ve always looked across at the Sathorn Unique building and wondered why it hadn’t been finished like the Lebua building, as it seems like there is so much potential for a beautiful building there.

Me and friends that climbed to the roof. The building behind us with the gold dome is the sister building, the State Tower/Lebua Hotel. 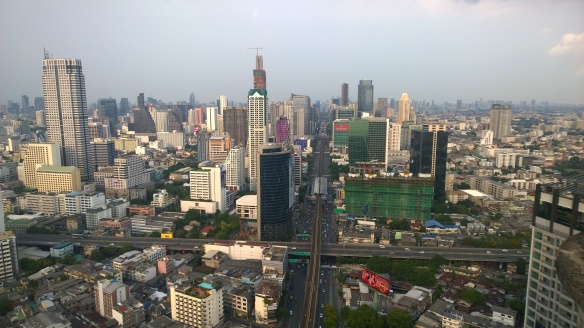 From the top of the building, looking down Sathorn Road

Me at the top and edge of the building, very sweaty after climbing 50 floors

The pillars and entrance to the stairwell leading back down. The columns are held together and in place by a lot of rickety metal braces…

Looking at the Chao Phraya River, Shangri-La Hotel, and the State Tower/Lebua Hotel building with the gold dome.

Selfie of me with the Chao Phraya River in the background 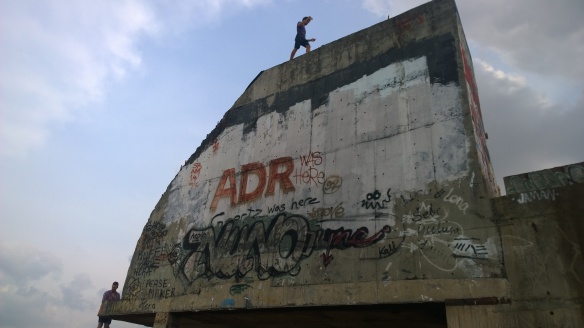 Someone climbing to the very, very top of the building, on what would have been the dome on the top 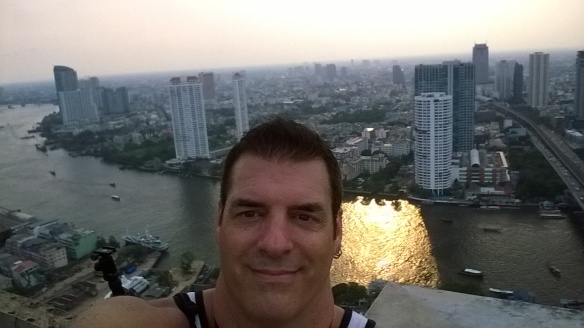 Selfie at the top of the building, with the sunset reflecting on the river below

After taking our pictures and taking in all the sights from the roof, we made the long winding descent back down 50 floors to the ground. Not surprisingly, the journey down was much easier than going up! Overall, it was a fun day, and the “Bangkok Ghost Tower” was definitely one of the most fun and interesting adventures I’ve had in Bangkok!